Welcome to my stop on the Fate of Flames Blog Tour! Make sure to check our Wendy’s Review + Excerpt, Amanda’s Review + Giveaway, and Maria’s Review + Author Guest Post!

Now without further ado, here is my Review and a fun little interview to follow!

When Phantoms—massive beasts made from nightmares and darkness—suddenly appeared and began terrorizing the world, four girls, the Effigies, each gained a unique power to control one of the classical elements: earth, air, fire, and water. Since then, four girls across the world have continually fought against the Phantoms, fulfilling their cosmic duty. And when one Effigy dies, another girl gains her power as a replacement.

But now, with technologies in place to protect the world’s major cities from Phantom attacks, the Effigies have stopped defending humanity and, instead, have become international celebrities, with their heroic feats ranked, televised, and talked about in online fandoms.

Until the day that New York City’s protection against the Phantoms fails, a man seems to be able to control them by sheer force of will, and Maia, a high school student, unexpectedly becomes the Fire Effigy.

Now Maia has been thrown into battle with three girls who want nothing to do with one another. But with the first human villain that the girls have ever faced, and an army of Phantoms preparing for attack, there isn’t much time for the Effigies to learn how to work together.

Can the girls take control of their destinies before the world is destroyed forever?

Fate of Flames by Sarah Raughley is the first book in a fantasy series about girls who have been bestowed cosmic powers from the universe in order to save it from the Phantoms! If you like Sailor Moon, The Last Airbender, and Pacific Rim then you’re going to devour Fate of Flames like I did!

Fate of Flames opens up with an action scene and I can honestly say that I was hooked from the very beginning! I loved the concept of it so much I didn’t want to put it down.

Raughley does a fantastic job building a world that is as believable as much as it is fantastical. It is set in a alternate universe like our own but Earth is plagued by these monster’s called Phantoms. Nature’s answer to combat them is to bestow powers on four very different girls called Effigies. When one dies, the powers get transferred to a new girl and the cycle continues. I thought the plot and world was highly creative and quite action packed!

Fate of Flames has a diverse cast of characters that I couldn’t help root for! Our main protagonist, Maia is a PoC and has now been bestowed with the Fire Effigy’s power. Throughout Fate of Flames we see her learn to accept her new destiny, learn to control her powers, try to reunite the Effigies and save the world at the same time. My favourite character overall was Chae Rin, the Earth Effigy. She was blunt, rude, strong, but also showed that she too had feelings. I liked that she pushed Maia to exceed her limits and grow to improve.

Raughley’s writing was equal bits exciting, serious and action filled. She does a fantastic job painting the scenes for our imaginations to wander and explore. I could easily envision everything that was happening on the page and was blown away with how things flowed.

I am highly anticipating the sequel now!

Not all books are without their faults, but the ones I am about to list are entirely personal to me and may not matter to you.

Although Maia is a strong and level headed main protagonist, I did find that she fell to the background a lot compared to the other girls. This could totally be intentional as she is new to being an Effigy and still has a lot to learn, but I just wish she had more then one moment that blew me away!

I didn’t quite connect with the romance in the story either. I found it dry and kind of confusing at times. Hopefully things become more clear in the sequels though.

Finally, as much as I hate cliffhangers for the sheer fact that it makes me crave and bleed for the next installment, I wished Fate of Flames ended on one. I found the ending a bit bland and wished there was more of an excitement built towards book 2.

Thanks to Simon & Schuster Canada, I got the opportunity for my stop on the Fate of Flames Blog Tour to interview the lovely author Sarah Raughley! Here is what went down:

SR: Epic, Fun, Exciting, Fast-Paced, and Girl-powery…is that stretching it?

JN: What is the inspiration behind Fate of Flames and what was the writing process like?

SR: Since I was a kid, I always loved the idea of super-powered girl crews because I wanted to be in one! There’s something really magical and escapist about it. I got my inspiration to finally go ahead and write one of my ideas when they announced Sailor Moon Crystal in 2012. It took me a while to write and re-write the series as things kept changing. So it was about keeping track of everything and making tough decisions as to what to reveal and when.

JN: “Fate of Flames” follows a huge cast of diverse characters. Who do you have the most fun writing, and who is your least favourite to write?

SR: Chae Rin was the most fun to write since she’s my outlet to say every mean thing I want to say about all the characters and the situation at large. She’s very blunt and that’s always fun. I don’t really have a least favorite because they’re all fun to write, but perhaps the most challenging character to write is probably Belle because she’s pretty serious and complicated, but there’s a reason for so much of what she says and does so making that apparent is key.

JN: What would you say is your fondest memory on your Fate of Flames journey so far?

SR: I think aside from getting the deal, going to the S&S building in Toronto and meeting the whole team…just knowing that I have a team dedicated to helping me on this journey was such a huge relief!

JN: What can we expect from Effigies #2 without giving away spoilers?

(Pick one answer for each question)

I just want to take the time to thank Simon & Schuster Canada for the opportunity to participate in the Fate of Flames Blog Tour, and Sarah Raughley herself for not only writing a story about girls who kick ass, but also taking time out of her busy schedule to do an interview with me.

Let me know what you guys thought of Fate of Flames by Sarah Raughley! I would love to hear your opinions as well!

Sarah Raughley grew up in Southern Ontario writing stories about freakish little girls with powers because she secretly wanted to be one. She is a huge fangirl of anything from manga to SF/F TV to Japanese Role Playing Games, but she will swear up and down that she was inspired by ~Jane Austin~ at book signings. On top of being a YA Writer, she is currently completing a PhD in English, because the sight of blood makes her queasy (which crossed Medical School off the list). 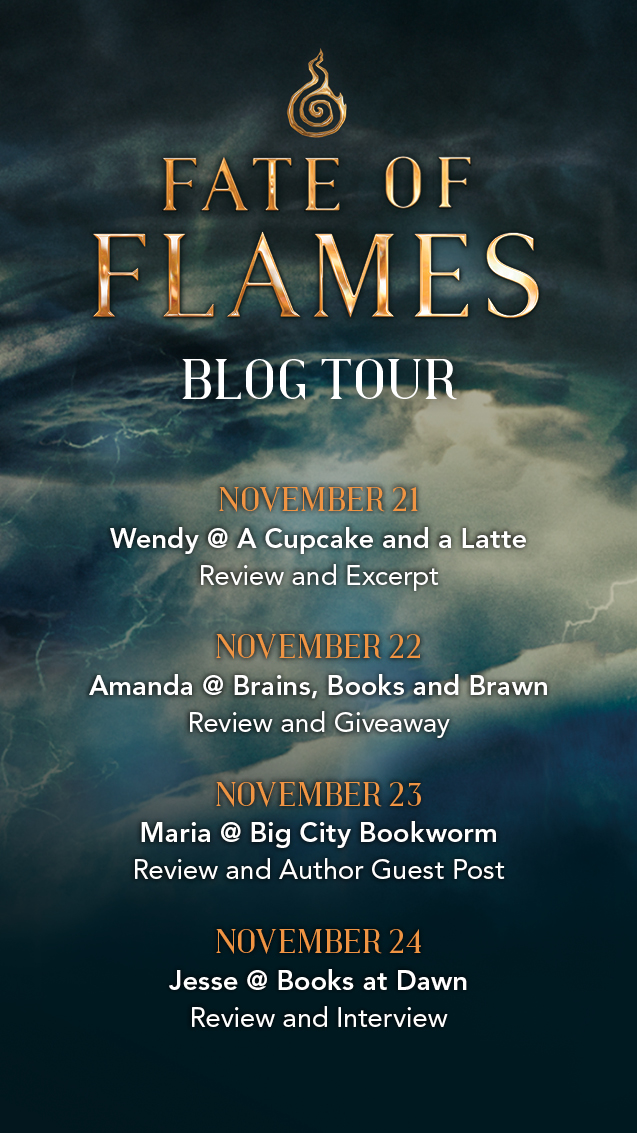