When her seventeenth summer solstice arrives, Brienna desires only two things: to master her passion and to be chosen by a patron.

Growing up in the southern Kingdom of Valenia at the renowned Magnalia House should have prepared her for such a life. While some are born with an innate talent for one of the five passions—art, music, dramatics, wit, and knowledge—Brienna struggled to find hers until she belatedly chose to study knowledge. However, despite all her preparations, Brienna’s greatest fear comes true—the solstice does not go according to plan and she is left without a patron.

Months later, her life takes an unexpected turn when a disgraced lord offers her patronage. Suspicious of his intent, and with no other choices, she accepts. But there is much more to his story, and Brienna soon discovers that he has sought her out for his own vengeful gain. For there is a dangerous plot being planned to overthrow the king of Maevana—the archrival kingdom of Valenia—and restore the rightful queen, and her magic, to the northern throne. And others are involved—some closer to Brienna than she realizes.

With war brewing between the two lands, Brienna must choose whose side she will remain loyal to—passion or blood. Because a queen is destined to rise and lead the battle to reclaim the crown. The ultimate decision Brienna must determine is: Who will be that queen?

*** Received an ARC from HCC Frenzy for an honest review ***

The Queen’s Rising by Rebecca Ross is the first book in a new YA fantasy series about a girl with mysterious parentage and looking for a place for herself in this world. On her seventeenth birthday all Brienna wants is to graduate in her passion and to be taken on by a patron. But things don’t go the way she wants and there is a bigger plan for her on the horizon. But can she step up to the task, or will it be too much to handle?

This was such an interesting read for me. It was so unlike any of the other fantasies I have read recently. It was a slow burn that’s for sure. 90% of the novel is all strategic talk and world building. There really isn’t any action until the final battle towards the end of the novel. BUT boy, was it every an epic battle. I would say it was well worth the wait.

I also really enjoyed the story set up of the novel. Although it was slow to start, Ross really created a solid foundation for her story to be built upon. From the history and processes of being a passion, to the intricate history of the fallen lineage and of Maevana, Brienna’s father’s people. So I really appreciated that things were laid out in front of us and never too info-dumpy.

But The Queen’s Rising wasn’t without it’s flaws; one being a design flaw, the other being a personal tiff. The flaw in design that I found comes in the form of a spoiler. We spend a good 75% of the novel wondering who Brienna’s father is. We know she has one but we are not told his name and neither is she. But sadly you will get spoiled because if you look at the front of the book there is a handy family tree chart that tells you exactly WHO her father is. So the big reveal was a big flop.

Finally the personal tiff flaw I found was in the romance. Brienna goes to Magnolia House (the passion school) at the age of 10. There she meets her soon to be master of knowledge Cartier. He is at least 18 if not older. By the end of the novel their romance begins to bloom (Brienna now 17 and Cartier in his late twenties). The whole relationship rubbed me the wrong way and I felt it was a little inappropriate since he’s known her since she was 10!

Have you read The Queen’s Rising? What did you think of it?

Let me know in the comments! 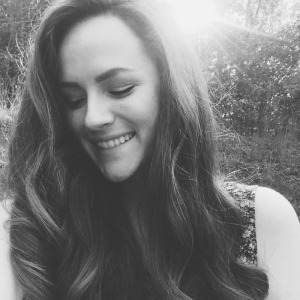 REBECCA ROSS grew up in Georgia, where she continues to reside with her husband, lively dog and endless piles of books. She received her bachelor’s degree in English from UGA. In the past she has worked at a Colorado dude ranch, as a school librarian, and as a live-time captionist for a college.

Rebecca writes fantasy for young adult readers. Her debut novel, THE QUEEN’S RISING, will be out February 6, 2018 from HarperTeen.

3 thoughts on “#Review | The Queen’s Rising by Rebecca Ross”