Waiting on Wednesday is a weekly meme hosted by Breaking the Spine that spotlights highly anticipated upcoming releases.

So here’s what I’m waiting on this week! 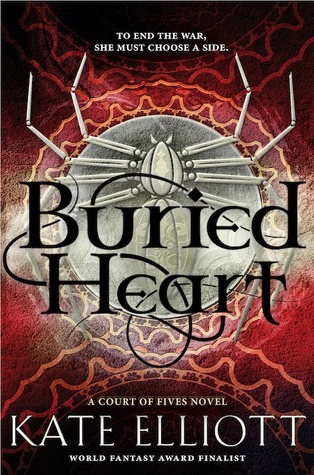 In this third book in the epic Court of Fives series, Jessamy is the crux of a revolution forged by the Commoner class hoping to overthrow their longtime Patron overlords. But enemies from foreign lands have attacked the kingdom, and Jes must find a way to unite the Commoners and Patrons to defend their home and all the people she loves. Will her status as a prominent champion athlete be enough to bring together those who have despised one another since long before her birth?

Will she be able to keep her family out of the clutches of the evil Lord Gargaron? And will her relationship with Prince Kalliarkos remain strong when they find themselves on opposite sides of a war? Find all the answers in this beautifully written and exciting conclusion to World Fantasy Award finalist Kate Elliott’s debut New York Times bestselling young adult trilogy!

I adore this series to pieces! It is not only fantasy, but it is home to a cast of all PoC characters. If you like strong heroines, great character dynamics and growth, as well as action packed adventures, then pick up this series!!

P.S. Kate Elliott is the author of Court of Fives and Poisoned Blade as well as several other YA and adult fantasy novels!

What has you guys waiting this week? Let me know down below!