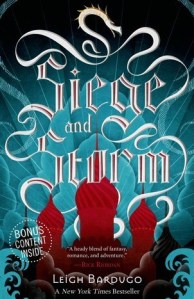 Hunted across the True Sea, haunted by the lives she took on the Fold, Alina must try to make a life with Mal in an unfamiliar land. She finds starting new is not easy while keeping her identity as the Sun Summoner a secret. She can’t outrun her past or her destiny for long.

The Darkling has emerged from the Shadow Fold with a terrifying new power and a dangerous plan that will test the very boundaries of the natural world. With the help of a notorious privateer, Alina returns to the country she abandoned, determined to fight the forces gathering against Ravka. But as her power grows, Alina slips deeper into the Darkling’s game of forbidden magic, and farther away from Mal. Somehow, she will have to choose between her country, her power, and the love she always thought would guide her–or risk losing everything to the oncoming storm.

Siege and Storm by Leigh Bardugo is the second book in The Grisha Trilogy. It picks up where book one left off. Alina and Mal have escaped the Darkling’s grasps and are now traveling across the sea to hopefully have a better life.

But things are never too simple, and the Darkling still lives. They get hunted down, kidnapped and must now find the second amplifier if they want to have a chance at finally defeating him. We meet new characters, we get to learn more history and legend, and will there be a third individual after the heart of our Sun Summoner? Let’s find out!

After reading the first book, Shadow and Bone, and expressing my thoughts on how lack luster Mal was, everyone told me to wait until I met Nikolai. Well guess what? I met Nikolai, and I will forever be in love with a fictional character! Thanks a lot Leigh Bardugo.

Nikolai is everything you could ask for in a character / love interest. He is witty, sarcastic, determined, intelligent, and loyal. Him and Alina meshed so well together that I couldn’t see her with anyone but him in this book. I thought his character was well executed and he stayed true to the type of person that he was from beginning to end.

It’s going to take a lot to knock Nikolai out of the #1 spot for my heart! Good luck other book boys!

As most second books do, Siege and Storm focuses on the world / history building. There was a lot of action in the first quarter of the book, then the second and third quarter take their time with the world and history building. As much as other people don’t appreciate it, I as a reader do. A story for me isn’t always about the action or the romance, it’s about the depth of the story and the expansiveness of the world itself.

I felt Bardugo did a great job with this section of the story. I was fully immersed in the Grisha world, eating up all the stories and legends about the amplifiers and the Darkling. The history and legends were rich in substance and folklore that I couldn’t get enough!

Of course another trait second books take on is the character development. Alina still has a lot to learn about her new powers and the amplifiers she now possesses. She is also dealing with the internal power struggle within her. Is it for good or for evil? Is she going to be totally consumed by it like The Darkling was?

Her heart is also put to the test in this book. Before all she had to deal with was Mal and the Darkling, but now there is Nikolai and she struggles with what she wants and what her heart wants. It will be interesting to see who or whom she chooses in book 3!

My dislike for Mal has carried over from Shadow and Bone and does not improve by end of Siege and Storm. He is constantly getting on my nerves with his annoying dialogue. Am I the only one who thinks this? In my own opinion, he needs to grow some balls and fight for Alina more.

He aggravates me when with his back and forth feelings. At times he is adorable with Alina, and then he does a 180 turn and becomes depressed Mal who distances himself from her. If he doesn’t improve in the next book, I will have no choice but to feed him to the Volcras in the Shadow Fold myself.

Siege and Storm by Leigh Bardugo is a great sequel to The Grisha Trilogy. It goes to show that Bardugo knows exactly how to write one filled with expansive world and history building as well as good character development.

And she created Nikolai for all of our enjoyment! On behalf of everyone, everywhere, we thank you for that!

Let know what you thought of Siege and Storm. I would love to know if we share the same sentiments! 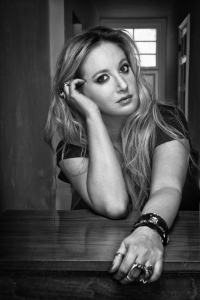 Leigh Bardugo is the New York Times and USA Today bestselling author of the Grisha Trilogy (Shadow and Bone, Siege and Storm, and Ruin and Rising).

She was born in Jerusalem, grew up in Los Angeles, and graduated from Yale University, and has worked in advertising, journalism, and most recently, makeup and special effects. These days, she’s lives and writes in Hollywood where she can occasionally be heard singing with her band. Her new book, Six of Crows, arrives fall 2015.

19 thoughts on “Siege and Storm by Leigh Bardugo | REVIEW”